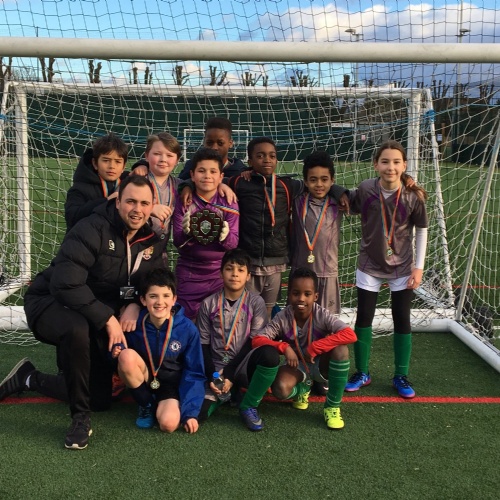 On Tuesday 21st February, our school football team secured the football league title for yet another year, following wins against Meridian Angel and Fleecefield. They play Starksfield in their final game with the title already in the bag! Well done boys and girls! The team enjoyed even more success recently in the Enfield Borough Plate final, securing a victory during penalties against Eversley!

On Friday 24th February, the ELT hosted a basketball tournament at Bowes Southgate Green. All schools from the Learning Trust entered; Chesterfield, Bowes Southgate, Bowes Edmonton and Hazelbury. We entered 3 teams, everyone that represented Hazelbury did a fantastic job and one of our teams managed to win the tournament with the last shot in the final game!

On Wednesday 1st March, the netball team played their penultimate fixtures of the year, drawing and losing narrowly in the two games played. Good luck for your final match girls!

On Thursday 2nd March, our girl’s football team qualified for the semi-final of the Girls Knockout Cup, beating Capel Manor after a thrilling penalty shoot out. Hazelbury were finally victorious after 21 penalties were taken! Our Girls Football Team were on the victory trail again with a win and a draw being just enough to win the Girls Football League by a point! Very well done Girls, an excellent season!

Finally, schools in our tag rugby cluster all played at Hazelbury recently where 15 games were played between 6 schools. Hazelbury finished joint first place with Brettenham and have qualified for the Enfield Tag Rugby grand finals! Well done everyone!